Cities around the world saw rallies in support of Ukraine this weekend With the continued invasion of Russian forces.

In the United States, crowds gathered on Saturday in cities including Atlanta, Washington, D.C. and New York.

New York: Olga Lydigema, from Kiev, told CNN at a rally in Times Square that she had not slept for the past three nights, and was worried about her loved ones who remained in Ukraine.

“I think the whole world now needs to come together,” Lidigima said, adding, “Now is the time to say no and stop one person who fears the whole world.”

Some Ukrainian supporters, such as Merrick Brown, whose great-grandparents came to the United States from Ukraine, believe that the international community should do more.

“I think the United States and NATO should provide military assistance to Ukraine,” said Brown, who also attended the Times Square gathering. He described the demonstration as peaceful and “more pro-Ukrainian than anti-Russian.”

Atlanta: Dozens gathered in the city center to participate in the “Stand with Ukraine” rally. Some of those present wore blue and yellow, the color of the Ukrainian flag, while others carried signs that read “Pray for Ukraine.”

Ukrainian Anton Kelpa, whose parents live in Kiev, Tell CNN’s WGCLhe learned that the invasion had begun when a Ukrainian-Canadian friend called him earlier this week, right before bed, telling him to call his parents right away.

“It was hard to believe,” Kelpa told WGCL. “It was a new reality.”

Washington, DC: Another crowd demonstrated in front of the White House. One protester, JB Wheeler, said he was “just an interested citizen” and had no personal ties to Ukraine. “No family or friends, just human contact and a desire to support the Ukrainians and their struggle,” Wheeler said.

Two miles away, Eleanor Shiuri Hughes, a graduate student at Georgetown University, left flowers on the steps of Ukraine’s embassy, ​​where a sign reads “Long live a free Ukraine.” 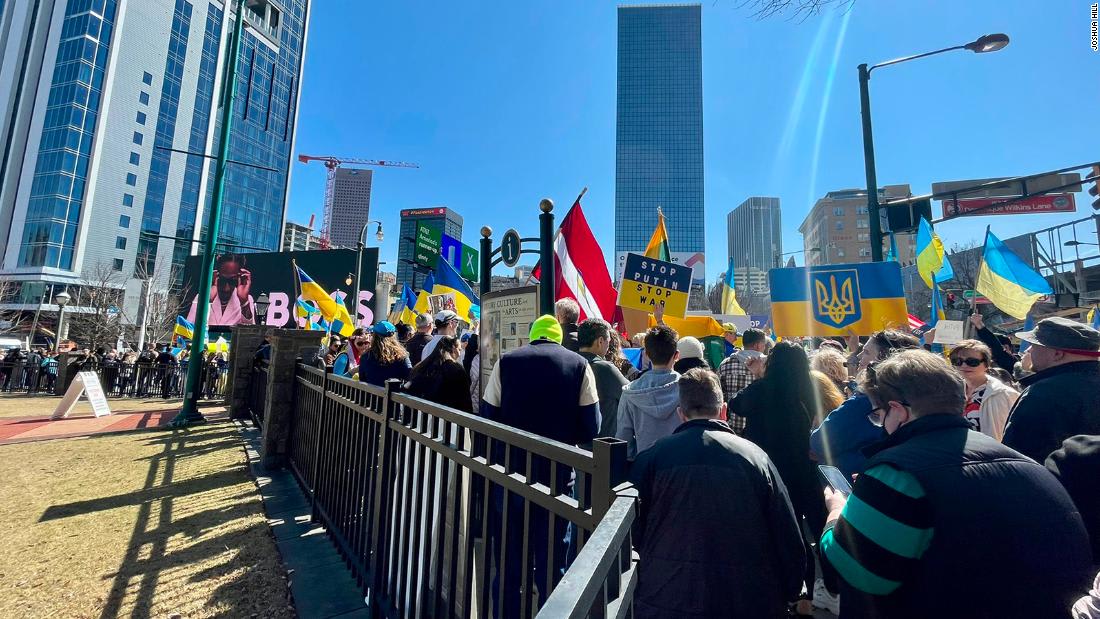