It looks like AMD Ryzen 7000 laptops are just around the corner.

ASUS Turkey now confirms that the Zenbook 14 will feature a Ryzen 7000 processor with integrated graphics. The company does not confirm the specifications of this processor specifically, but thanks to the official naming scheme from AMD, we can be sure that it is based on the Zen 3 architecture.

The product page mentions both Ryzen 5000 and 7000 CPUs, probably because the latter is an update to lower-power Cezanne chips for the Ryzen 7000 series. In this case, the AMD Ryzen 7 7730 is likely an eight-core CPU.

As for the laptop itself, it is a small 14-inch laptop with a 2.5K screen with a brightness of 400 nits. It is marketed for home use with a long battery life, a lightweight 1.4kg chassis and a wide range of connectivity options.

ASUS only confirms that the system features integrated AMD Radeon graphics. Assuming this is indeed a Cezanne update, this processor should, again, feature Vega graphics architecture. 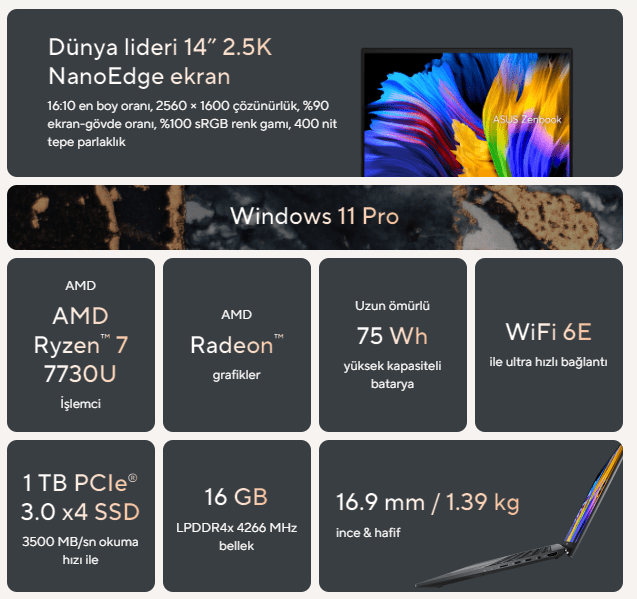 We can now add this CPU to the well-known Ryzen 7000U storage, which currently has 5 models. The 7000U series is confirmed to include Zen4, Zen3, and Zen2 combined with Vega, RDNA2, and RDNA3 architectures within a single product family.

AMD is likely to announce additional Ryzen 7000U processors around CES 2023 early next year. The company has already revealed two Ryzen 7000 CPUs codenamed “Mendocino” based on the Zen2 architecture. These laptops are supposed to become available by the end of this year.